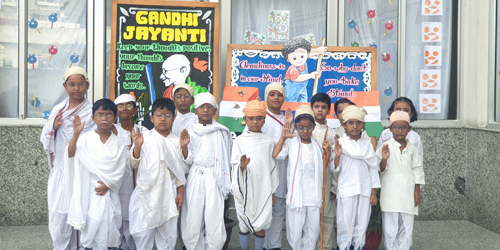 Sant Nirankari Public School, Govindpuri celebrated Gandhi Jayanti on Oct 1, 2019 in the school premises. An extended assembly was conducted where students of 1st and 2nd standard depicted Gandhi Ji’s various thoughts and sayings in their fancy attire of Gandhi Ji. Pre-Primary students marched a rally to follow the footsteps of the great leader and save the environment. Following the message of Swachh Bharat, Class 3 organized a Poem Recitation spreading the awareness to Clean India, Green India. Classes 4 and 5 were involved in Slogan Writing on the theme ‘Gandhism’. A Motivational Documentary on “The Father of the Nation” was shown to the students of Standard 6 to 8. Teachers gave informative speech on life history and various movements initiated by the Father of the Nation. The celebration ended with a pledge of taking the responsibility to make our nation Clean and Plastic Free with a notion:

“Is cleaning only the responsibility of the karamcharis? Do citizens have no role in this? We have to change this mindset.”